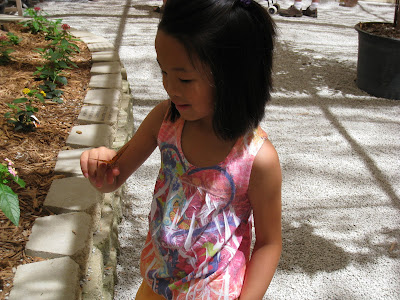 Well, most butterflies are free to fly wherever they want, aren't they! But not ALL the butterflies at the zoo are able to fly about freely -- especially not the ones in the butterfly exhibit we visited the other day.
For the first time ever (despite many visits and attempts), a butterfly landed on Maddy's finger! She was so thrilled! Failed attempts at butterfly landings last year resulted in numerous instances of tears and frustration. So I was doubly delighted that our first visit to the butterfly exhibit this year was so successful!
Maybe the clothes had something to do with it?? Look closely, Maddy's shirt has a butterfly on it, so perhaps that was just the thing the visiting butterfly wanted to see. 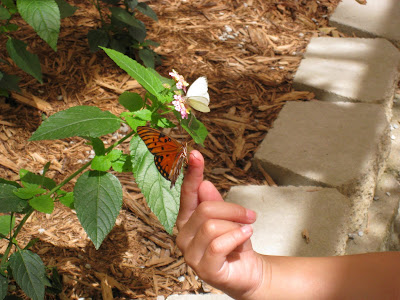 We might have tried to get one of these birds to sit on Maddy's finger or shoulder,
but I'm pretty sure that is not allowed! 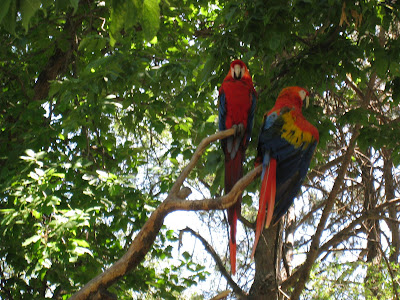 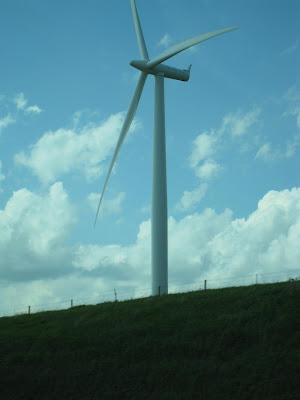 Although these photos are not too great, as I took them in a moving car through the window, I loved seeing these energy windmills here and there dotting the Iowa landscape.
My Mother was born and raised on a farm in Iowa and that makes the state extra-special to me. When I was growing up, we traveled across Iowa every year to spend time on the farm. Such fun memories -- feeding slop to the pigs and turning our City noses up at milk straight from the cows! Iowa is truly a lovely state to drive across -- full of rolling hills.
Everything is so green and beautiful right now, but be warned, there is a bit of road construction.
Poor Rickster -- I was constantly putting on my "passenger-side" brake to assist him in driving! :) 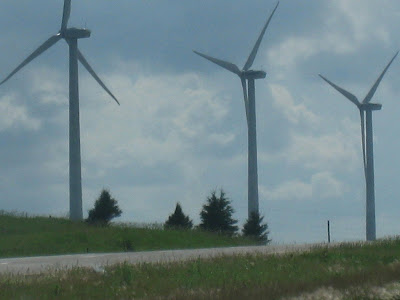 Thank You and Father's Day Tradition

First, thank you to all who left comments, said prayers and kept my Mom and my family in your thoughts and prayers. I know there is power in prayer and we all appreciate it so much. What a sweet community of blogging friends -- it means so much to me! 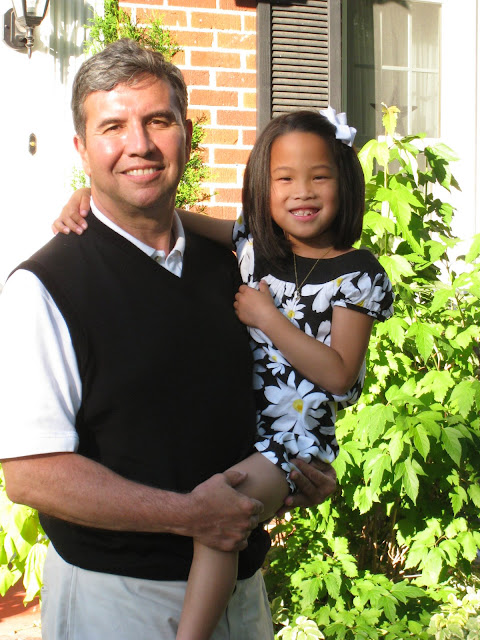 Since I started my little "tradition" of having my picture taken with Maddy on Mother's Day, I suggested that Mr. Tennis do the same. He agreed, but kept telling me to hurry up already! Could be that we had just gotten home from a nearly 8-hour road trip and the temp is in the 90s and the humidity feels like it is nearly that!! Anyway, Maddy adores the Rickster (the boys do too, of course, but they aren't around for photos today, though I do have one with Cboo). So Happy Father's Day to my sweet Dad, Al, and also to the Rickster! 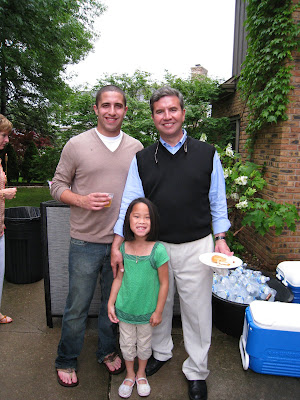 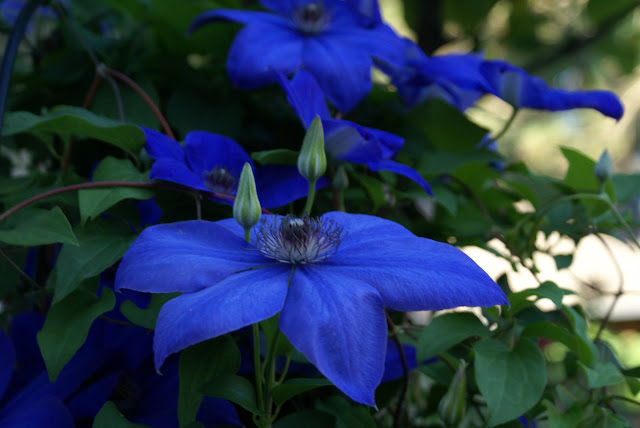 Loving the beautiful Clematis in our backyard. Usually, such a pretty flower would put a big smile on my face, but I am feeling very blue. You see, my dear sweet mother is ill.

Very ill. She made it through breast cancer, mastectomy, chemo and radiation in 2001,
and now the cancer is back.

Already we know it is in her lungs and her spine. More tests are being done to determine if it has spread elsewhere and just what type of cancer she has. She has had a terrible cough for a few months now, is very tired and has no appetite. The doc said she's lost 20 pounds in the last year -- actually I think it's more like she's lost it in the last 3 months. She seems smaller and more frail every time I see her. We don't live in the same city, and I've been so worried about her (and about my Dad too actually). My twin sister lives there though and has been a tremendous help in taking her to appointments, talking to the docs, keeping me and the rest of us siblings (all 6) updated. I will be forever grateful to her for taking this on, as I know it is not an easy task. I talk to my Mom every night and she sounded like she felt a teensy bit better last night. My heart breaks to have her so ill and suffering, but she has been a real trooper.
If you happen to the praying type, I would reallly appreciate a quick prayer for her
and send some good thoughts our way.
Posted by Jboo at 12:05 PM 36 comments: 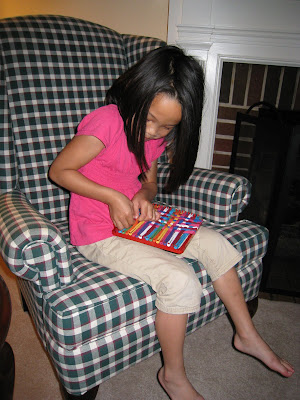 Making potholders!! Do you remember ever doing this as a child? I do! Making potholders with a little loom and the loops can keep a child (or adult) occupied for hours!
This is truly a craft whose time has come again -- according to moi! Not only can your child make some lovely potholders (and who doesn't need a couple more), it also teaches eye-hand coordination, dexterity, working with patterns, math skills in counting rows -- and don't forget -- you get a handy-dandy little potholder when you finish! 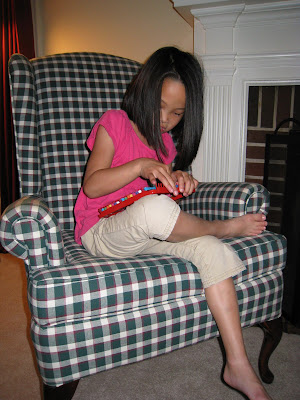 At first, Maddy was not at all interested in learning how to work the loom (getting technical, aren't I!), but she watched me doing it and decided it looked like fun! We have a road trip coming up in a week or so and this might be a good little project to work on instead of watching dvd's all the way across Iowa.
Watch out -- the next project I plan on teaching Maddy from my own childhood involves embroidery thread and embroidery hoops. Yes, lots more craft fun to come at my house and none involve a glue gun! 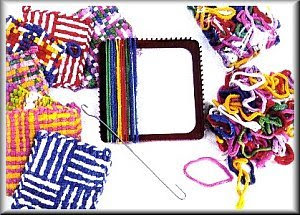 Another Biker in the Family or "Look Ma - No Training Wheels!" 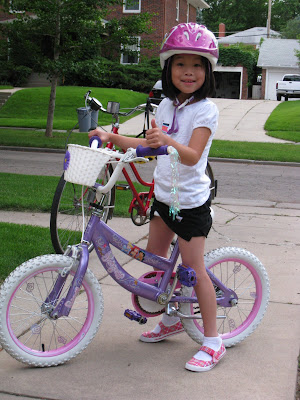 Whew -- after what seems like two years of trying to help Maddy learn how to ride her bicycle, she mastered it yesterday! Our neighbors had a smaller bike for their granddaughter, so Maddy practiced on it and voila -- she became a rider without training wheels! Mr. Tennis practiced with her up and down the street. She is so proud of herself and we are too!
Way to go Maddy girl!! 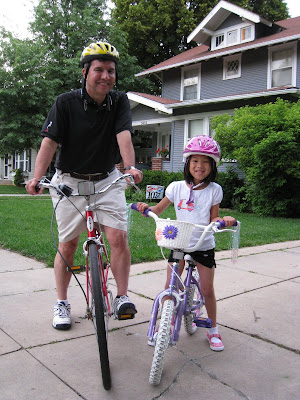 Now, she's going to try and follow in my footsteps and win a bicycle championship. Not to brag, but yes, I was the winner in the girls 10-year old age group at a bicycle-riding competition a few (ahem, quite a few) years back. Won a great big trophy that my brother accidentally broke on the way home from the championship. Funny how you remember those things,right Tom!!
I see lots of bicycle rides in our future! :) 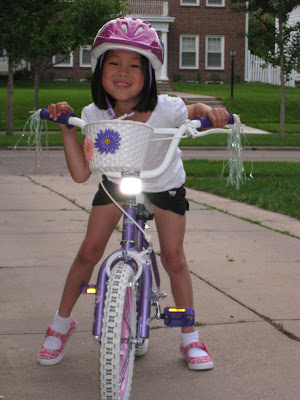 Imagine this picture of little girl sweetness . . . Maddy saw a friend from school when she went to a b-day party on Sunday. Upon seeing each other, the girls ran towards one another, calling each other's name and met with a great big hug!
It was so sweet and did my heart good -- just what I needed! They've been out of school all of one week, so it hasn't really been very long since they've seen each other.
Yes, I am learning from my 7-year old --
friends = joy = hugs!!
Posted by Jboo at 12:03 PM 15 comments:

Who likes Chuck EEEE? Yeah, I thought so! It's never been a favorite place of mine. I can be a bit of a germaphobe at times and that place screams for hand sanitizer! Now, why don't they have hand sanitizer near every game?? I would like it better if they did, wouldn't you!
I can probably count the number of times that I took the boys to Chuck E Cheese on one hand. And one of the boys (not saying which one) was actually a bit afraid of the Mouse, so did not even want to go there!
Anyway, we have gone there a bit more with Miss Maddy as she LOVES the games, winning and hoarding tickets and figuring out just what junkety junk she can buy with those tickets. 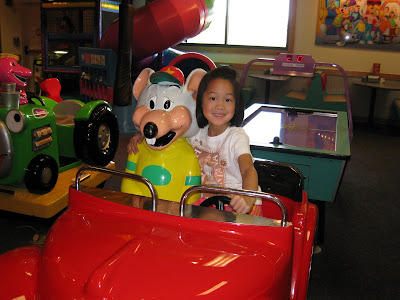 Last Friday was her first day of summer vacay from school and she had a friend spending the day with us, so I decided to take both girls there as a little treat! It wasn't crowded at all and the girls had a blast trying to see who could win more tickets. They went through 50 tokens each in record time! Not to worry, we had more fun after Chuck E's . . . I took them to look at puppies at a nearby pet store. What was I thinking?!?! 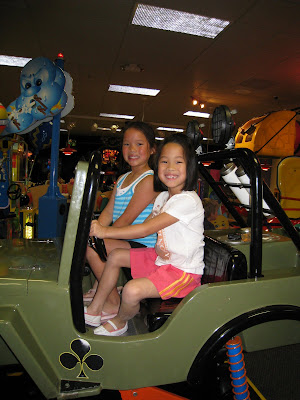 The photo below is from nearly four years ago -- it was (I believe) her first visit to Chuck E's for a good friend's birthday! Here she is with Barney and the Birthday Girl!
Weren't they the cutest! Those two were inseparable at daycare for a couple of years. 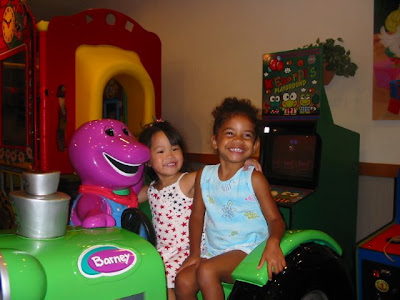 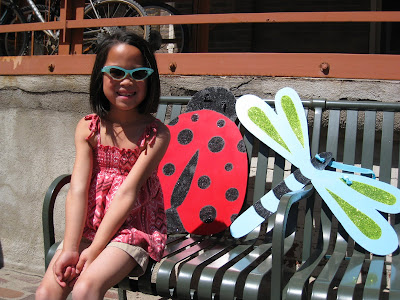 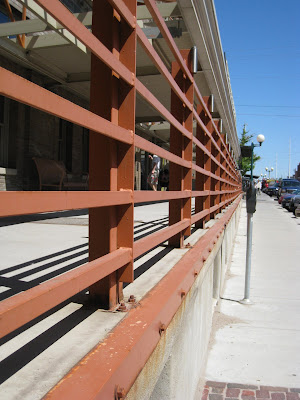 At the Farmer's Market -- I just like the lines in this photo, so included it,