I'm not quite sure just how we got to
the end of August already!
Boo hoo!!
Summer -- please don't go!

But, before we let August slip away,
we must celebrate a few August family birthdays!
First, we have baby Harry, the youngest grandson!
His first birthday was a couple of weeks ago.
He is simply little Mr. Adorable -
his sweet face matches his very sweet disposition!
He's standing on his own and ready to walk --
the only problem is that he can get where he's going faster
crawling!  Seriously, he is a little speed demon!

Just after Harry's birthday
was my younger sister, Amy's birthday!
Wish we could have seen her for her birthday -
we need to do some celebrating!
Gin and tonics for all, right Amy?! :) 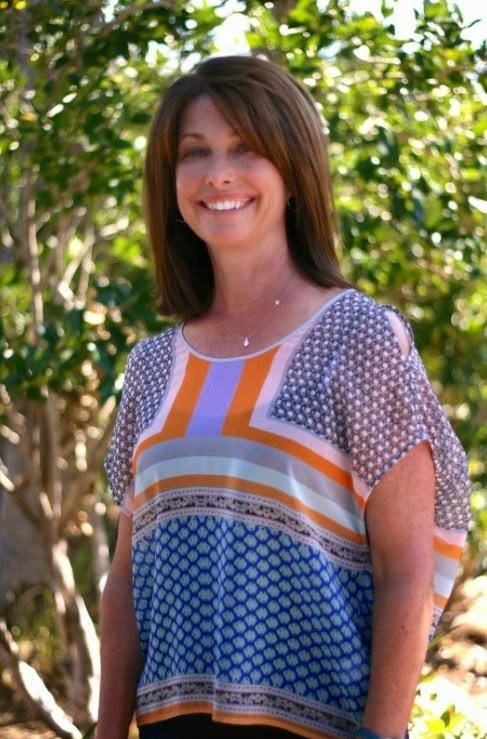 Then just last week, it was Big Al's birthday
my Dad, Al, that is!
Maddy and I were so happy to see him earlier
this month.
He just turned 91!


Happy Birthday Harry, Amy and Al!
You are all so very special!
xoxo
Posted by Jboo at 8:14 PM 6 comments:

Maddy and I had a quick trip at the start of
August to Cincinnati to see my sister, her husband
and my Dear Old Dad -- a/k/a Al! 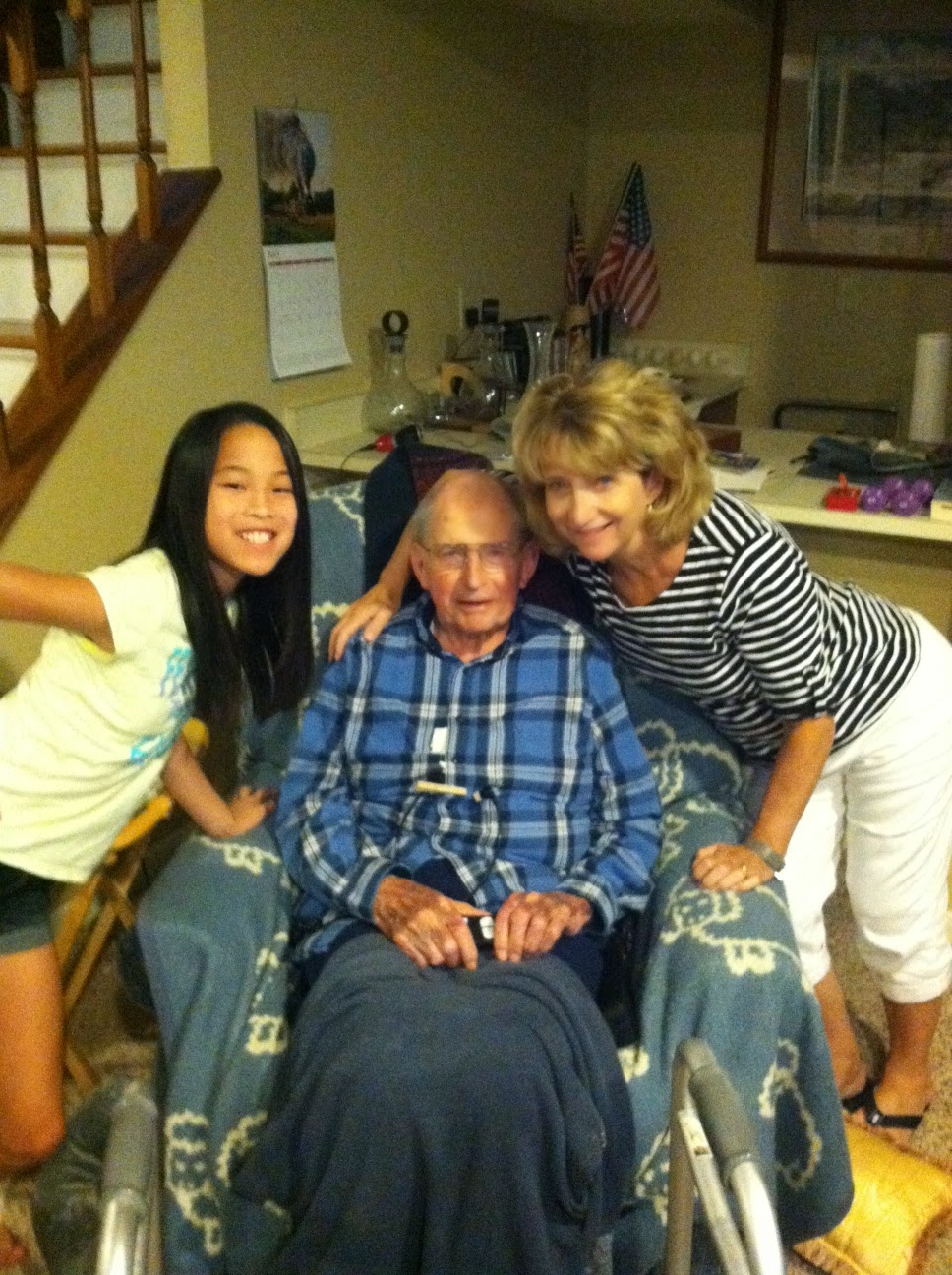 It was really great to see them and spend a few days there.
They have a  beautiful home and have
been so wonderful to have my
Dad living with them!
What a sweet blessing!

The weather was perfect and Cincinnati is an
incredible big city!
Big cities just feel different, don't they?
Busy and exciting! 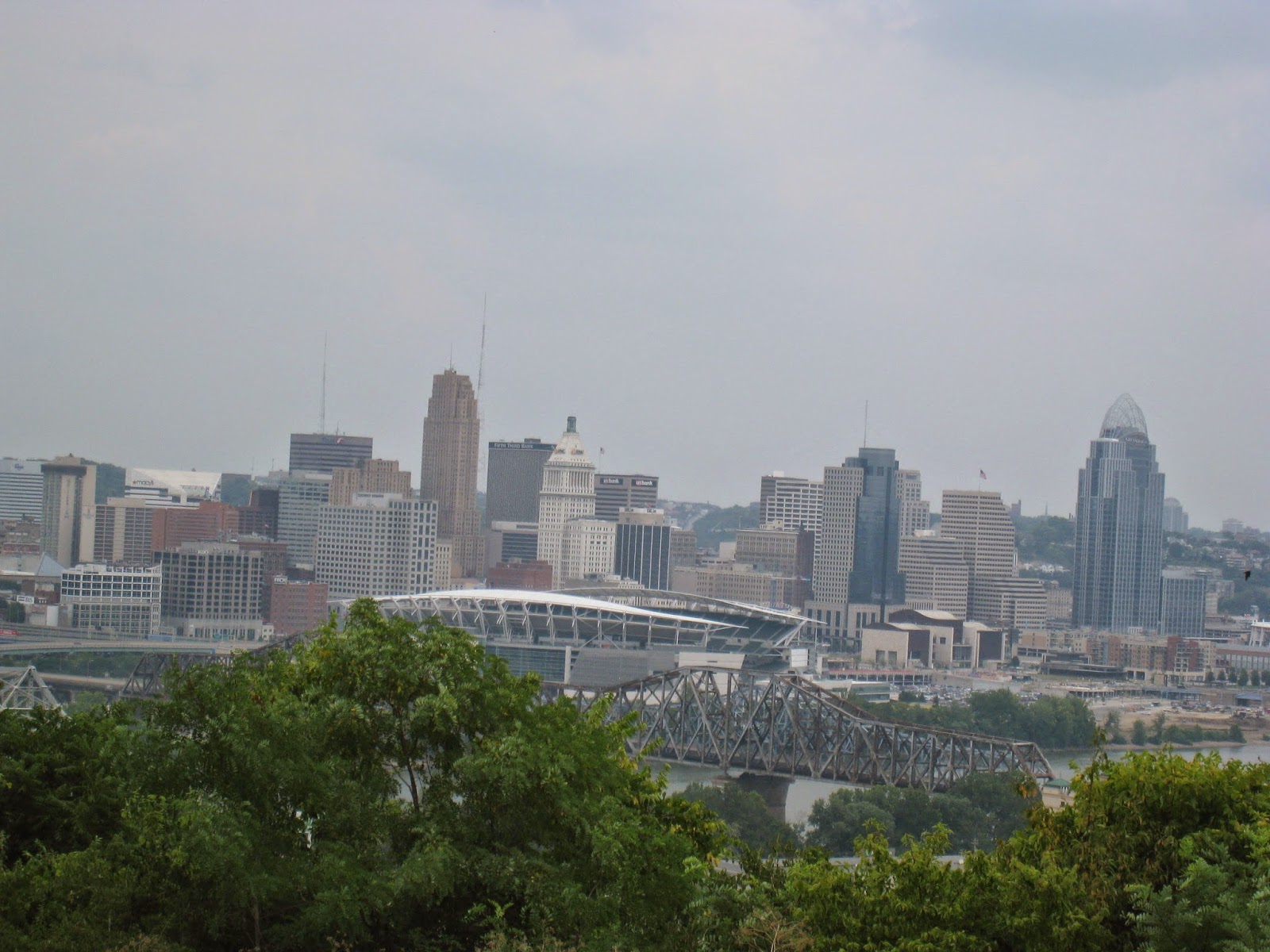 While Maddy will readily admit that
she is not really a cat person,
Karen's cats were really fun and
funny!
Hmmm -- could a cat be in our future? 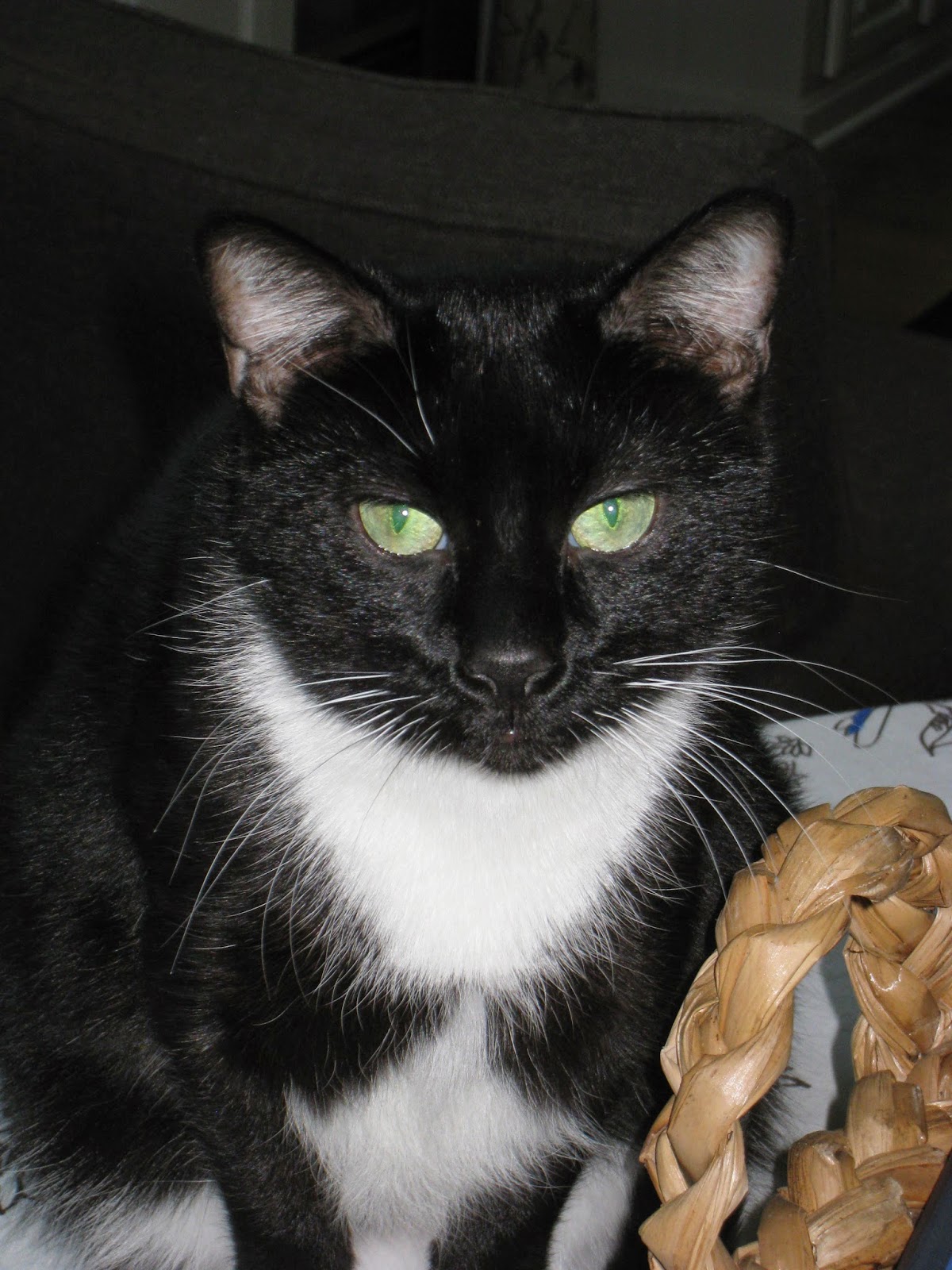 I don't think so as Miss Muffy would not be
happy about that at all!

Thanks for hosting us Karen, Russ and Al!
We miss you all!

It was an exciting and short first day of
school -- they started at 8 am and were out at 11 am!
Pretty good plan -- especially for a
certain 7th grader! 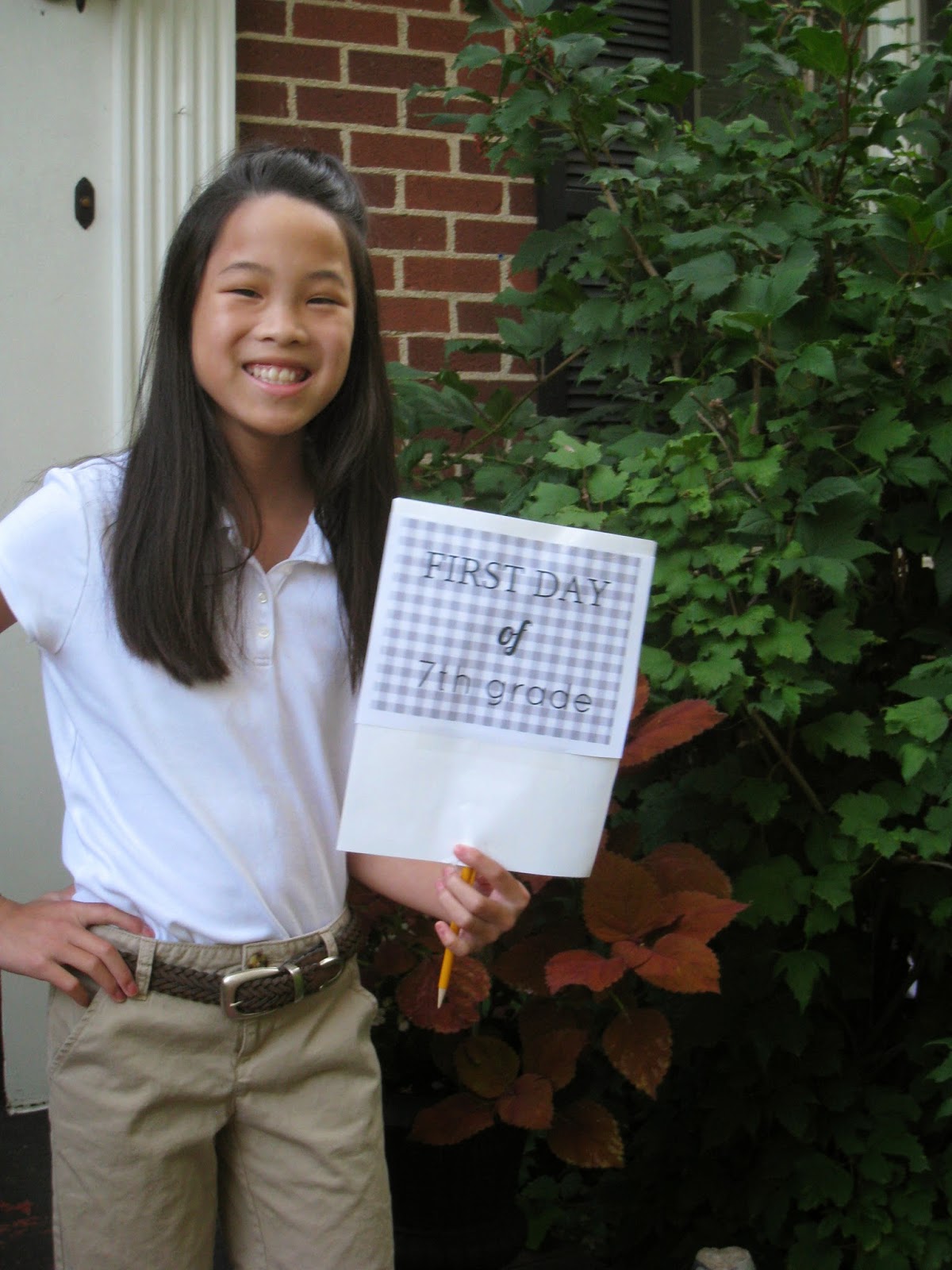 It was exciting to be back to school,
see friends, meet new teachers
and
end up totally confused by the
switching of classes every 45 minutes plus homework!
Seriously -- homework the first couple days - no fair! ;)

The first week was a bit of a challenge for
Miss M, but she came through and we
know next week will be even better!

Bonus this year --
her school finally has
air conditioning!
After cool temps earlier in August, the heat and humidity
ratcheted up to near 100!
Oy!

Now, where's that arctic plunge when you really need it?
:)
Posted by Jboo at 8:57 PM 5 comments:

Back To School Shopping!

When you go to a Catholic school
that has uniforms,
back to school shopping is easy-peasy!

Pick up a few new polos
(white, navy or green only),
some khaki shorts, the uniform skirt from
the designated uniform store
and loads of pens, pencils, notebooks,
kleenex and other supplies!

Labels: Back to School, shopping

Do any of you remember ever seeing the
Alfred Hitchcock movie, "The Birds?"
It's a scary one and a bit creepy too! 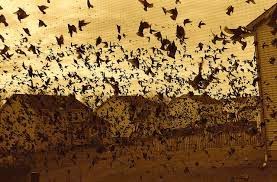 Guess who had a "bird" experience herself??
Yes, MOI!!!

It wasn't as bad as the movie, but . . .
some creepy mourning doves
built a nest on our patio!
I believe they are cousins to disgusting pigeons - yuck!

I left them alone for a long time hoping they
would be like robins and once the little
ones were big enough, they would
all depart the nest!
But NO --
they stayed and stayed and stayed!
And totally creeped me out!

Every time I let the dog out or went out that door,
they were there -- lurking and staring at me!
It appeared there was a Momma and 2 babies.
But, the babies were big, they weren't teeny little birdies!
I planned to knock the nest down when they were out
of it.  Only problem -- they never left the nest!
Seriously -- so creepy!

I did a little research and learned the fastest
way to get rid of them, beside recruiting blue jays or hawks to dive-bomb them,
would be put some balloons by the nest.
The balloons would bounce around and would scare them away!

YES!  It worked perfectly!
Almost perfectly that is.
They are out of the nest, the nest has been removed,
but . . . .
they are lurking around and haunting me!
They sit on the basketball hoop, the driveway,
they even were up on the back porch trying to look in the window!!!!!!!!
ACCCCK!! What next?
Know any Blue Jays or Hawks that
need a home?
Posted by Jboo at 10:26 AM 5 comments:

Flips and Jumps and Handsprings!

The last camp/clinic Miss Maddy attended in July
after the theatre camps was a
gymnastics/tumbling week-long clinic. 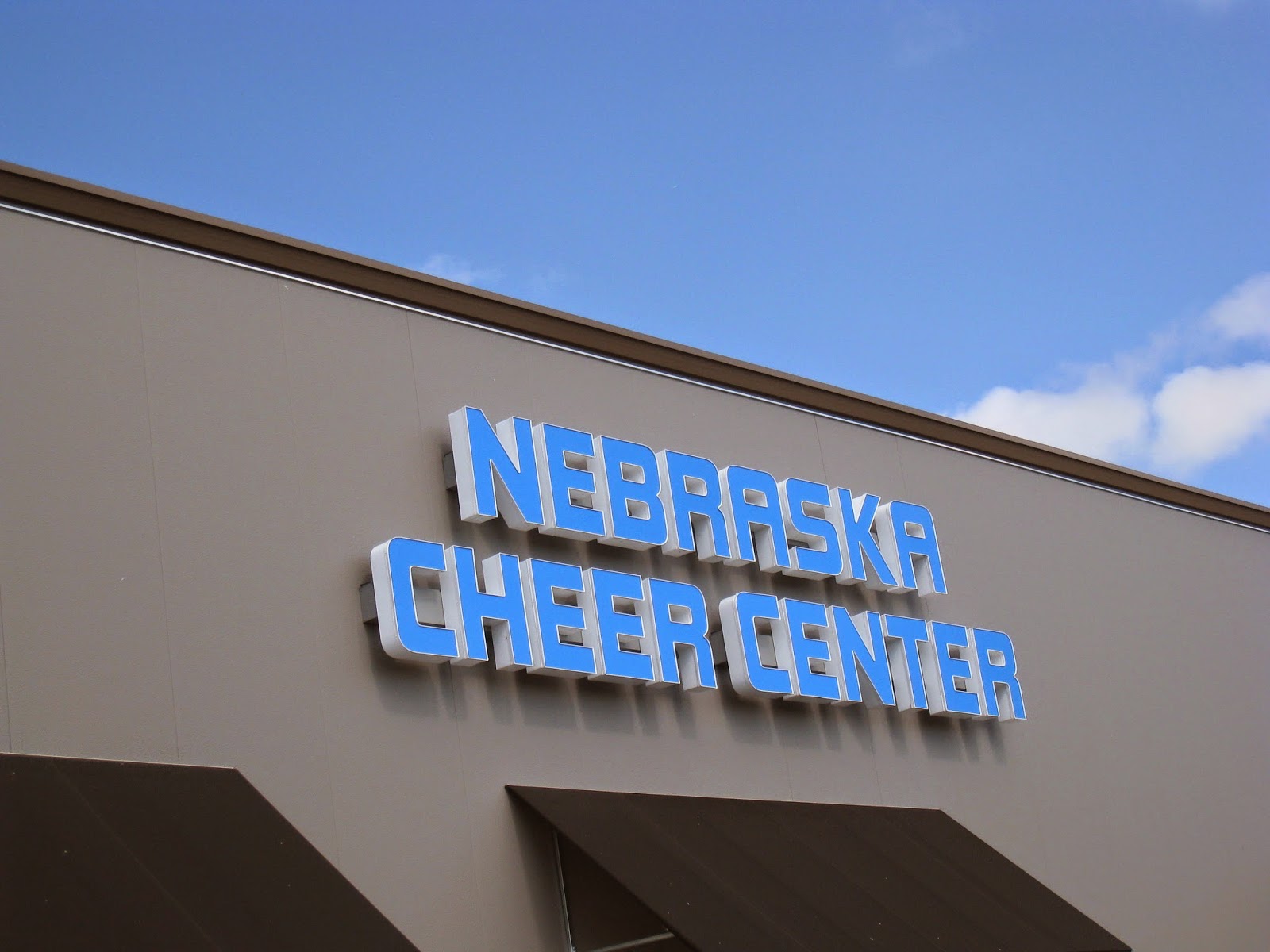 She really, really wants to do a back handspring
following a round-off!

Maddy asked me about my gymnastic abilities??
I think I peaked at somersault a long time ago and never even
came close to mastering a backwards somersault! 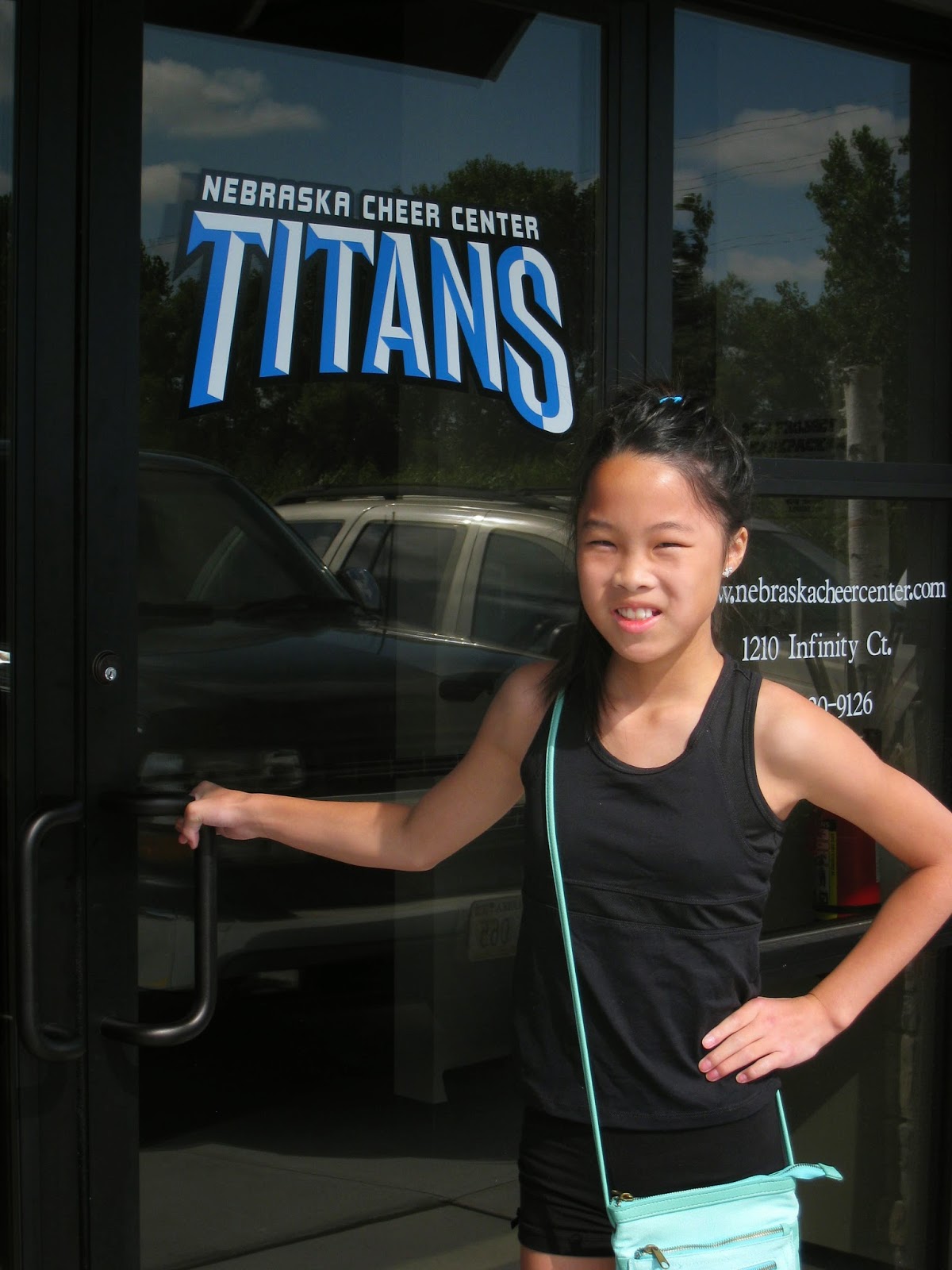 She loved the camp and improved so much!
Sooooo,
she's giving up dance and switching to
gymnastics/tumbling!
A private lesson once a week is really moving
her closer and closer to her goal!

Meanwhile, she's making me work with her on ab exercises
daily to help strengthen our core.
My core says whattttt?
She does the exercises diligently while
I struggle and
she laughs!
Tweens can be so cruel! :)

Shine a little light on . . .
my son and daughter-in-law's
beautiful deck and lighting!
They are sooooo very clever.

Remember in Parenthood where they had that big
family dinner outside and the incredible lights around the area??
Like this? 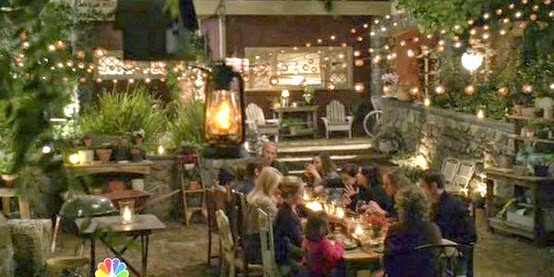 Well, Philip and Catherine figured out how to do something
similar and had it all ready for a housewarming/end of residency
party they hosted last month.
The lights are really sweet and cast such a warm and
lovely glow!

It was really a fun party with
their new neighbors, friends and loads of family.
We played one of those bean-bag games --
(I have no idea what they are called),
but this one was a little trickier and much
harder to actually get that bean bag where it was supposed
to go.
You'll be happy to know that Mr. Tennis and I actually
won the match between us and Connor and Maddy! 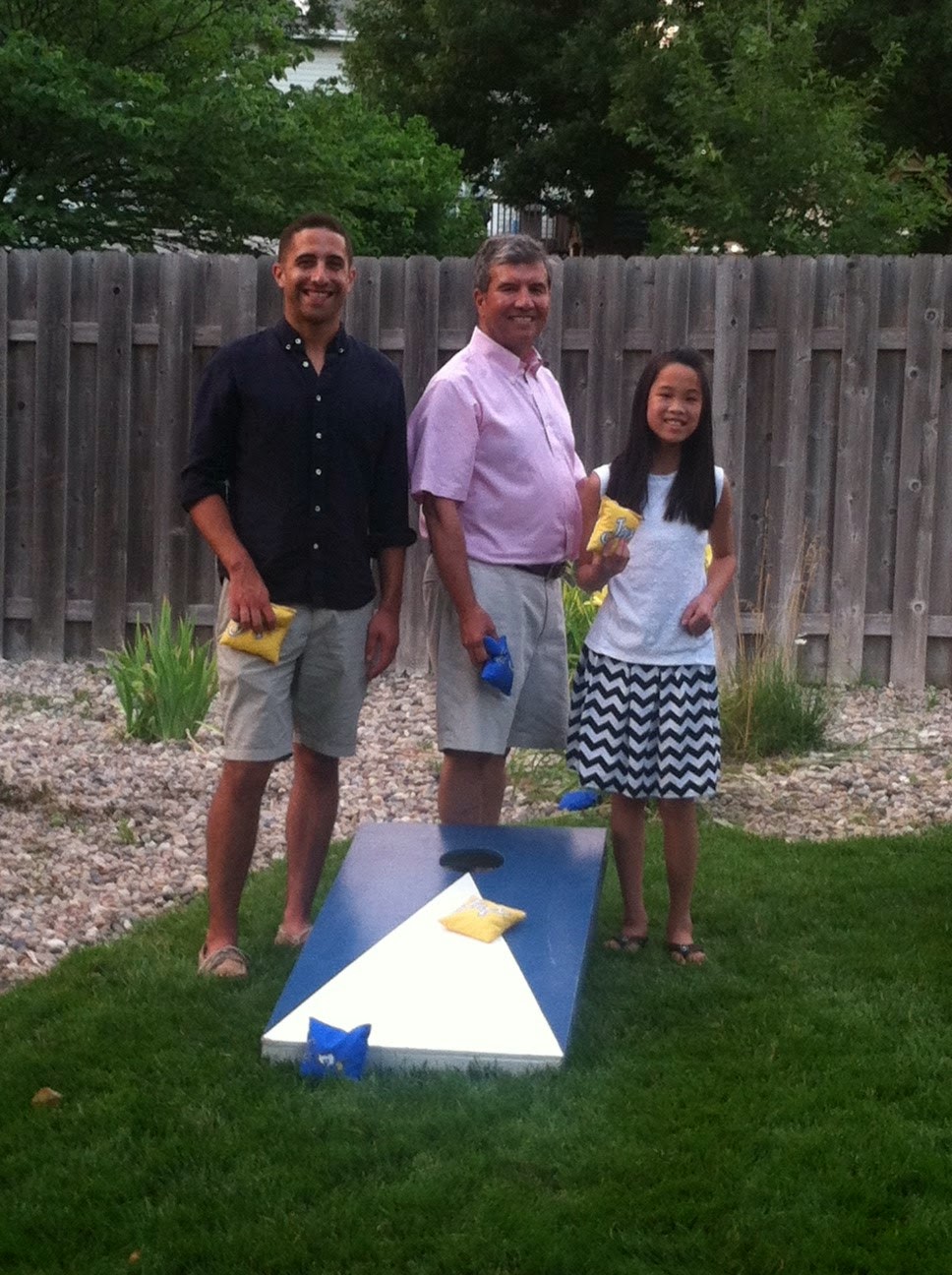 What's fun on a Saturday in Nebraska??
Not time for Husker Football yet, but it is
time for the Super Fair! It takes place a bit earlier than the state fair
and is a smaller version! 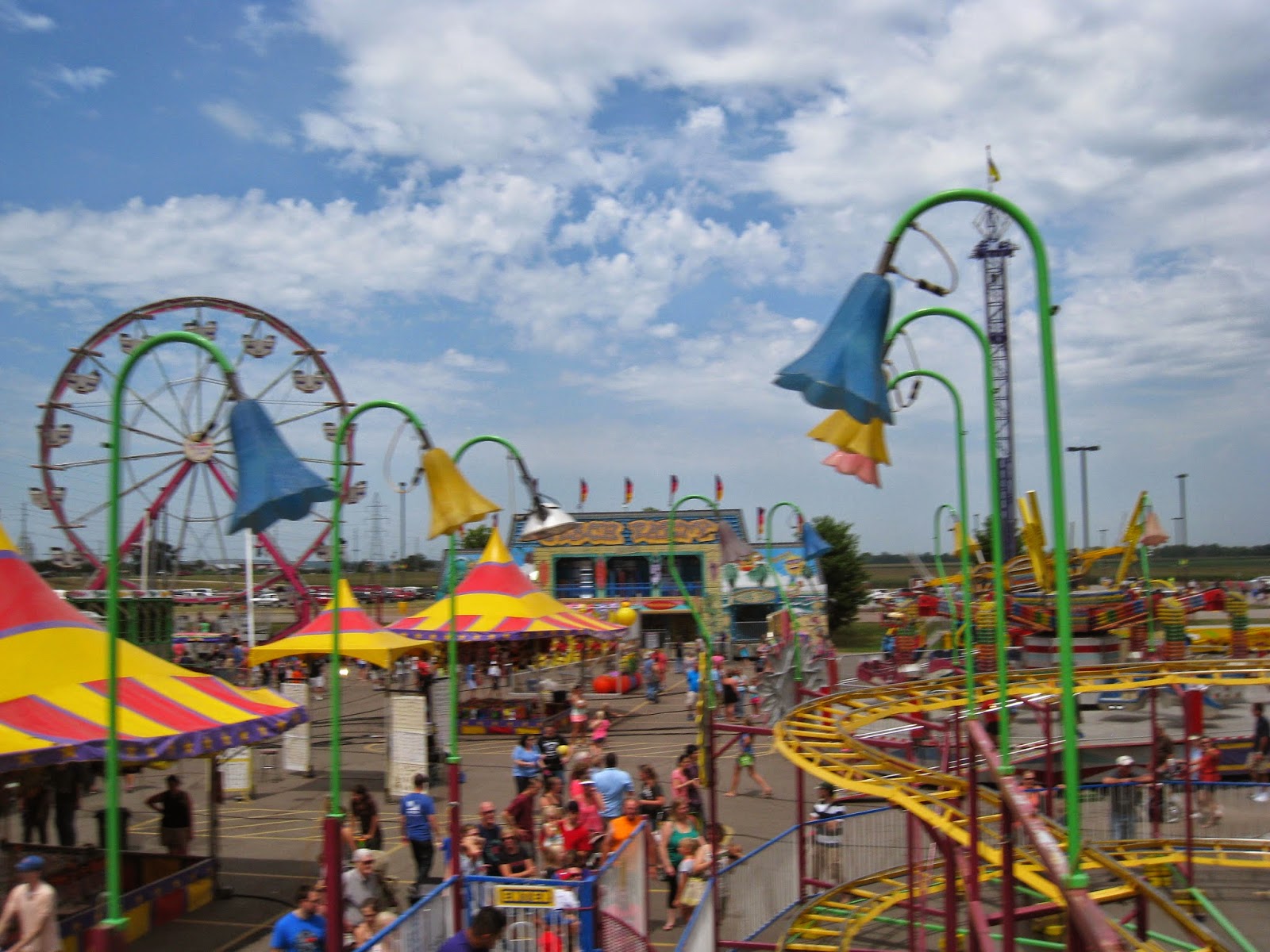 So, Maddy and I went to the super fair the other day!
We saw some camels, goats, donkeys, horses and wolves!
Yes, wolves!!
All animals found in Nebraska!

Of course, we had to go on some rides -
the ferris wheel (always a favorite and
almost always a disappointment -- it goes sooooo slow).

So, we also went on one called the Tornado!
I was so dizzy I almost fell over when I got off that one.
Then we rode a small roller coaster called the worm!

And what's a fair without
Funnel Cake! 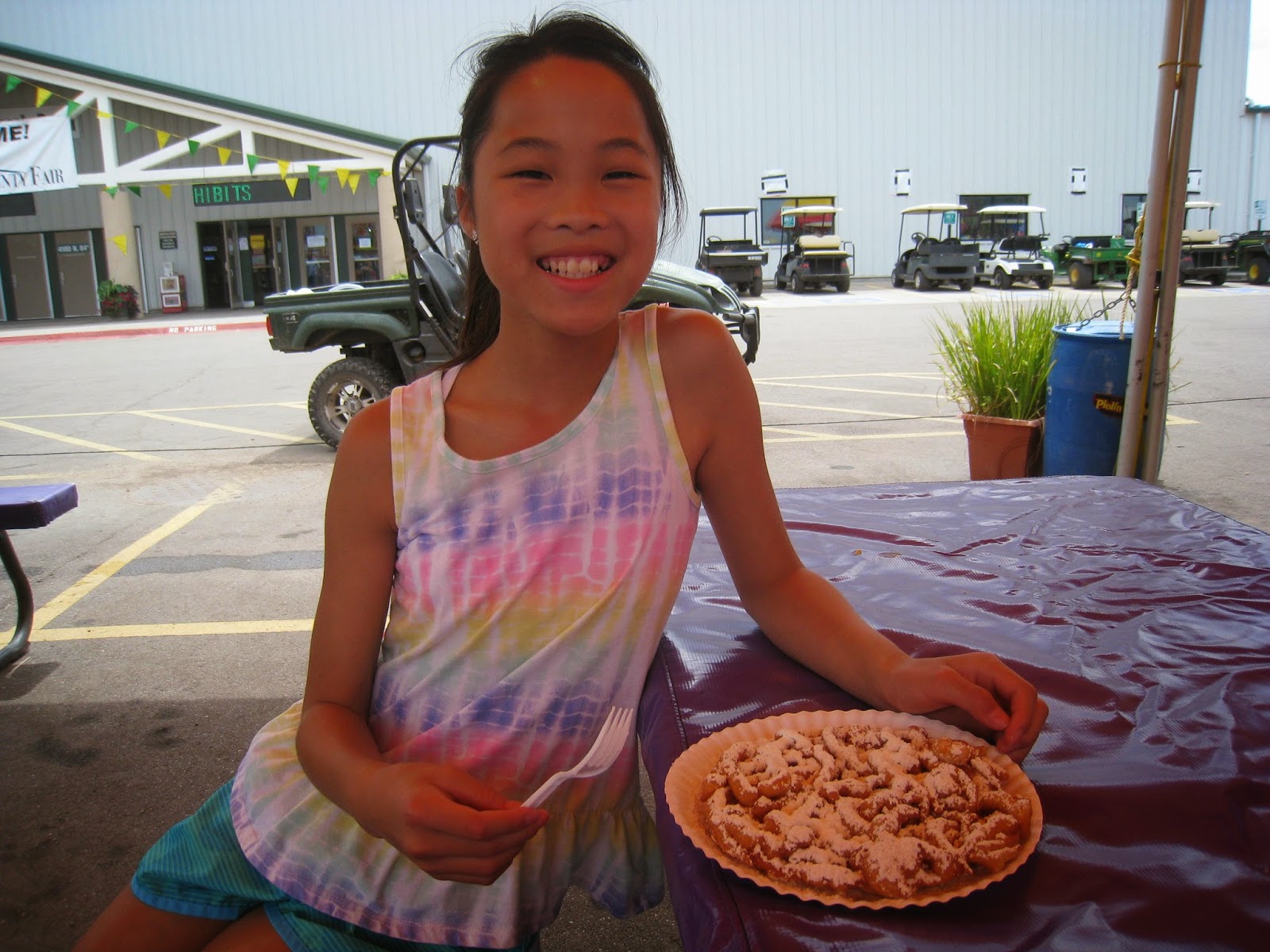 Say it ain't so!
How did it get to be August already???
Noooooo!
Slow down summer!

Maddy and I had a fun last day of July yesterday!
We went mini-golfing and borrowed Miss Kamree
to go with us! 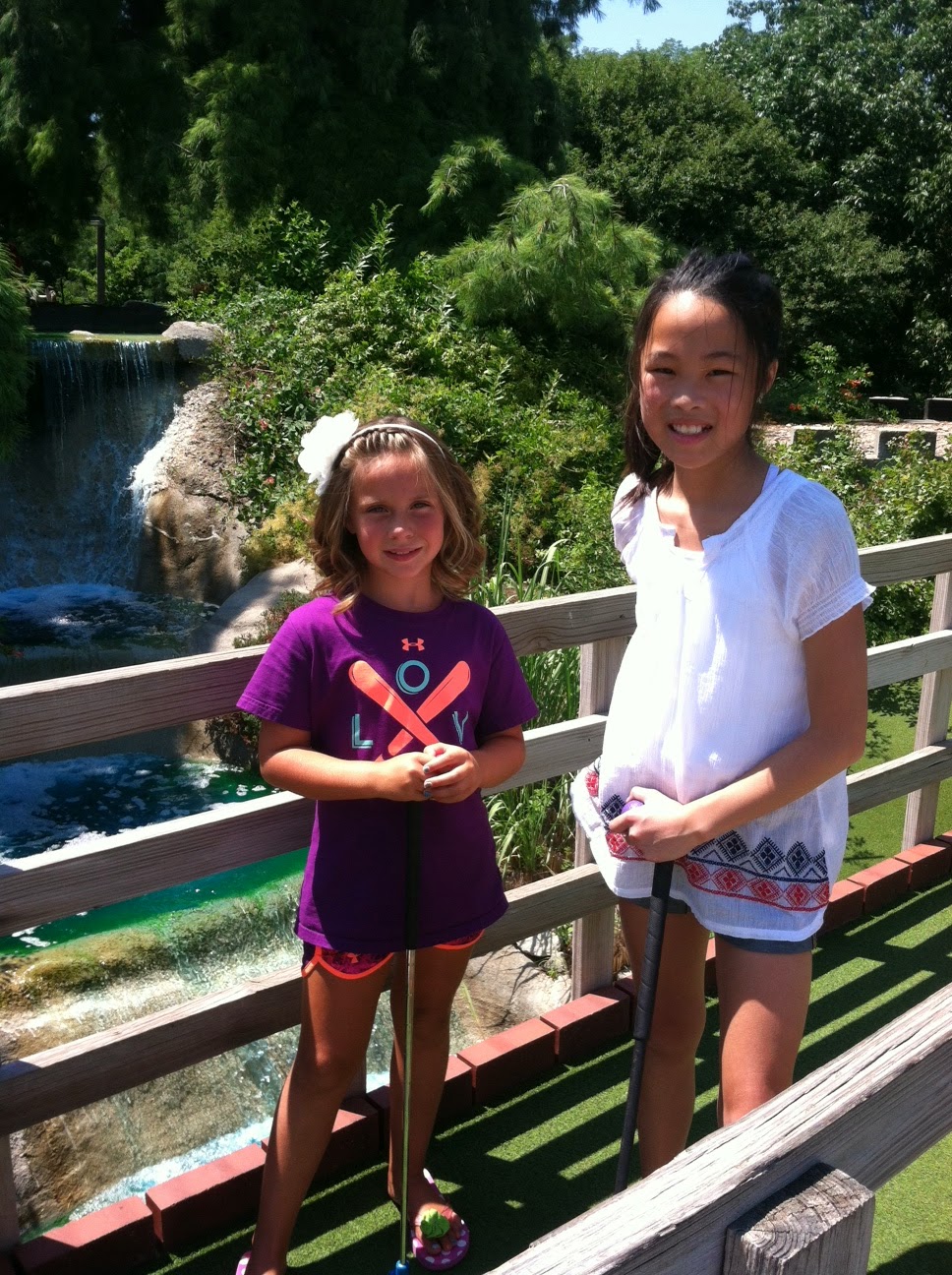 Oh my word!
It was a blast!
We loved golfing with that girl!
And bonus -- she made a hole-in-one
and so did I!
Amazing!

In other news,
Southern Living has reported that it's
National Cheesecake Day!
Shocker (since I love all goodies) but I am
not a huge fan of cheesecake!
However . . .
when chocolate is involved - I'm there!
I don't make it often - but I love
this Chocolate and Vanilla Cake!
It's called just "cake" but it is really cheesecake. 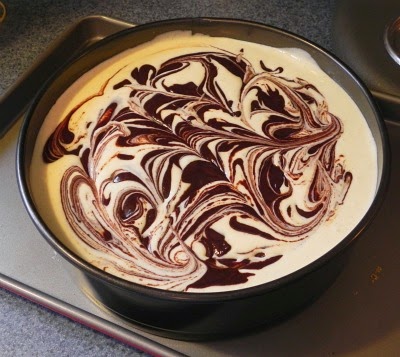 Adding this to my weekend list of things to do!
Make a cake!

Happy August
Happy Weekend!
Posted by Jboo at 5:03 AM 5 comments: